The UK Ministry of Defence has awarded a £45m contract.

The UK Ministry of Defence has awarded a £45m contract to the Supacat-Babcock industry alliance for over 140 further Jackal weapons-mounted 4×4 patrol vehicles to support operations in Afghanistan. The new order will bring the total number of Jackal vehicles in service with the UK Armed Forces to over 400, in 3 configurations; Jackal 1, Jackal 2 and this latest improved variant, Jackal 2a.

Production of the Jackal 2a vehicle uplift commenced in February 2010, immediately following on from final delivery of a UOR contract placed with the Supacat-Babcock alliance in April 2009 for approximately 120 Jackal 2 and more than 70 new 6×6 ‘Coyote’ Tactical Support Vehicle (Light) (TSV(L)). This contract has been completed successfully to a high quality standard and on time.

The upgraded Jackal 2a is an enhanced version of the successful Jackal 2 with the design changes driven by direct operational feedback. The primary change is the introduction of a new cab design with integrated mine blast protection which simplifies production and improves the performance over that offered by the previous system fitted to Jackal 2.

Dubbed `Jackal` by UK Armed Forces, it has proved its supreme versatility as a weapons-mounted light patrol vehicle in Afghanistan, combining speed and maneovrability with unparalleled cross-country performance over the region’s harsh terrain.

Supacat and Babcock formed an industry alliance to ensure UK Armed Forces receive the best equipment in the shortest possible timescale. Supacat is prime contractor and as the design authority is responsible for design, development, prototyping, integration and overall programme management. Babcock is responsible for detailed production planning, purchasing and manufacture at their Devonport facility.

Nick Ames said, “This order is a further endorsement of the performance of Jackal on operations in Afghanistan and of the agility of the Supacat-Babcock alliance to deliver against demanding timescales”.

Roger Gillespie, Equipment Solutions Managing Director, Babcock, said “The Jackal vehicle has been a resounding success and these additional Jackal 2a’s will further enhance the operational capabilities of our troops in theatre. The ability of the Supacat-Babcock Alliance to consistently deliver these vehicles also provides military planners with assurance of our continued support.” 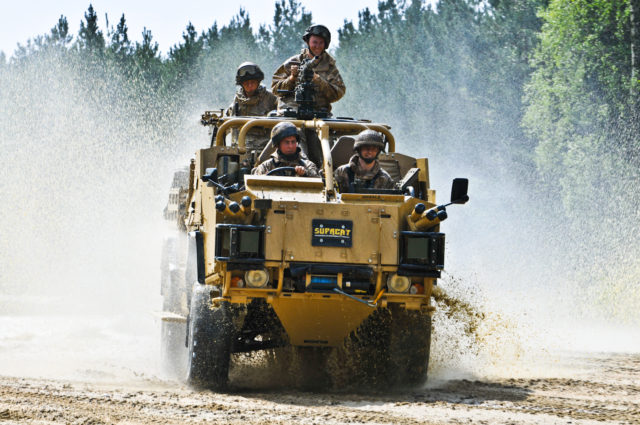