Supacat is unveiling LRV600, the 6×6 configuration of its high performance off-road Light Reconnaissance Vehicle (LRV), at DSEi offering users the ability to increase their capability and payload, whilst remaining air portable from inside a CH-47 Chinook.

Developed for rapid intervention operations in harsh environments, the LRV platform has the distinctive design feature of being convertible between 6×6 and 4×4, offering users the flexibility to reconfigure the vehicle to meet different operational requirements within hours by the addition of a 3rd axle module.

“The Supacat LRV600 demonstrates the unique flexibility of the LRV platform enabling users to convert between 4×4 and 6×6 depending on their mission. LRV600’s increased capability and air portability also sets it apart as a tactical capability for special operations”, said Phil Applegarth, Head of Supacat, part of the SC Group.

LRV 600 will have a new weapon system fitted at DSEi which is a first for land based, special forces vehicles of this type. Working together with the US company, Arnold Defense,

and a team of industry experts, Supacat has integrated the ‘FLETCHER’ 2.75-inch laser guided rocket system in a demonstration of the newly launched FLETCHER concept. The system provides the user with firepower that would otherwise involve calling in air or aviation assets.

In developing LRV Supacat has taken the rolling chassis and automotive systems from the Land Rover Discovery and adapted them for specialist military applications to offer unrivalled performance for a vehicle of its size and weight class.   Using a mass-produced automotive platform delivers reliability, safety and cost efficiencies. In addition, the vehicle is ITAR free and can be supported via the existing globally available spares network enhanced by Supacat’s established military vehicle through life support service. LRV has been developed with a common user interface to its Supacat HMT `Jackal` to maximise inter-operability and minimise training. 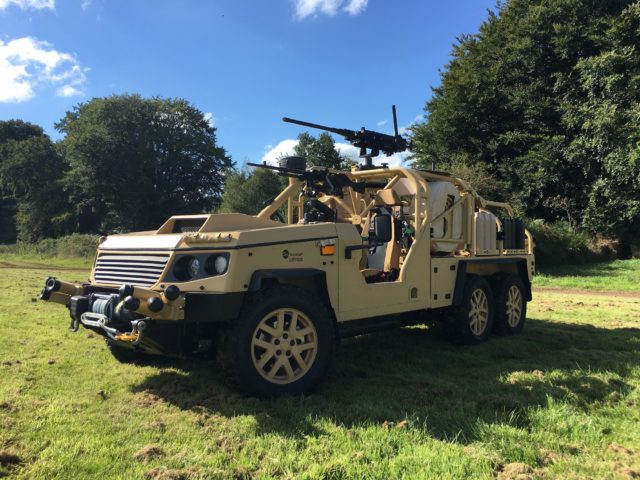