Supacat is unveiling the LRV 400 `Mk2` at DSEi 2015, an all-new, all British lightweight reconnaissance vehicle.  Designed as a versatile tactical capability for special forces, the LRV 400 can be transported inside a CH-47 Chinook fully equipped and loaded so the user can “drive on, drive off” the aircraft operationally ready.  The LRV 400 has the unique feature of being convertible from 4×4 to 6×6 to provide a flexible alternative configuration that increases payload, capacity and range to meet different operational requirements.

LRV 400 is a high performance off-road vehicle for rapid intervention operations in harsh environments by special forces, border patrol or strike forces.  It can achieve speeds of up to 100mph/160km and operate up to 800km from the point of insertion, offering a true special forces long range capability.  It is designed for a crew of 3 or 4 supported by an operational payload of 1700kg with a gross weight of 4200kg.

In 2012 Supacat launched the LRV 400 `Mk1` as a new concept to fill a gap in the market for an agile off-road vehicle sized between Supacat’s HMT Series (Jackal, Coyote, HMT Extenda) and quad bikes.  Having proved the concept, Supacat has evolved the design to develop the LRV 400 `Mk2`.

The significant design change is a move to a well-known, mass produced base automotive platform, adapted by Supacat for specialist military applications.  The automotive platform delivers proven performance, reliability and cost efficiencies to the LRV 400.  In addition, the vehicle is ITAR free and can be supported via the existing globally available spares network enhanced by Supacat’s established military vehicle through life support service.

“For the first time the user has the ability to deploy from a Chinook fully operationally ready.  Coming from the Supacat stable, LRV 400 offers a scaled down version of Jackal with its acclaimed all terrain tactical performance in all environments”, said Phil Applegarth, Head of Supacat, part of SC Group.

The LRV 400 has been developed with a common user interface to its HMT `big brother` to maximise inter-operability and minimise training.  A variety of lightweight armour solutions, weapons and communications systems can be fitted to meet each customer’s requirements offering a multi-role capability.  The LRV 400 has front and rear independent double wishbone air suspension offering variable ride height and lock out – bump stops for stable firing and high power to weight ratio.  Powered by a V6 3.0 turbo diesel providing 256 bhp and 600Nm Torque , it has an 8 speed automatic transmission and high and low permanent 4WD with centre diff lock. Cross-axle diff locks are also available as an option. 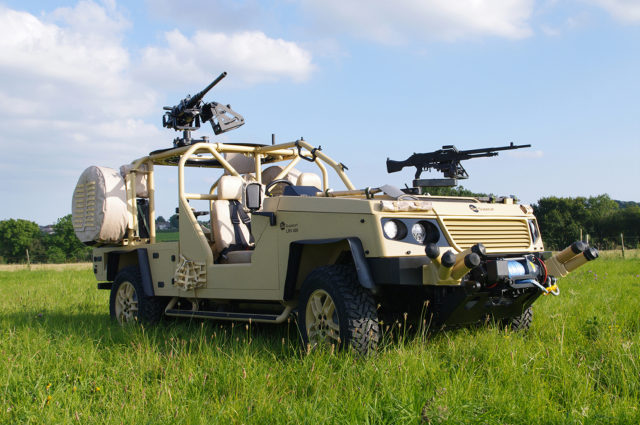