Supacat are pleased to announce that they are the title sponsor of the British Army’s Cape Epic Mountain Bike Team. From 27 March – 3 April 2010 Army cyclists, Captain Tony Ireland, currently serving in Cyprus and Staff Sergeant Phil Marland, of 29 Regt RLC will tackle one of the world’s toughest mountain bike races, the ABSA CAPE EPIC 2010. This is the finale to a years’ worth of endurance mountain bike racing that has aimed to raise awareness and funds for two very worthy charities; Help for Heroes and the Army Benevolent Fund.

The CAPE EPIC is described as Africa’s magical and untamed mountain bike race; it is the ultimate test for a mountain bike racer, attracting top professional riders from across the world. Each team of two will endure 8 demanding days of racing through South Africa’s unspoilt Western Cape, in the mountain biking equivalent of the Tour de France. The 800km route passes through wide open African plains, majestic mountains, deep ravines, indigenous forests, spectacular coastlines and flourishing vineyards. The Cape Epic is characterised by dusty and demanding gravel paths, strenuous rocky uphills, thrilling technical downhills, magnificent river crossings and stunning forested single tracks that include over 16,000m of climbing; that’s the equivalent of climbing Mount Everest…….twice! Further information can be found on the event website www.cape-epic.com.

Throughout their voyage they aim to continue to raise awareness of the work that their chosen charities do. Donations in support of the team’s charities can be made via the team’s websites:

Members of Supacat met the team today during an exciting photo shoot alongside the Jackal vehicle at Supacat’s test track in Devon. Supacat’s Sales and Marketing Manager, Jamie Clarke said: “we are delighted to be supporting the Army’s Cape Epic Team on this unbelievably challenging event. Supreme cross-country performance in arduous and hostile terrain is not new to Supacat and as you can see from the pictures, we share the team’s enthusiasm for muddy tyres! We wish Tony and Phil the very best of luck and hope our support helps them along the track to success. Good luck!”. 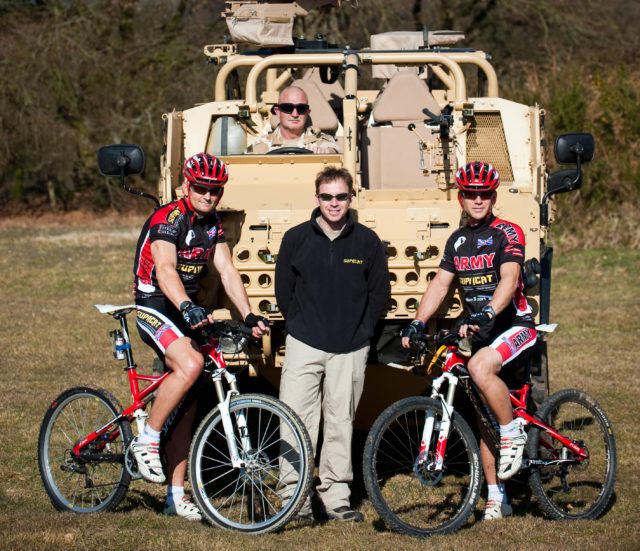