23-01-2020
The Army Photographic trade pitches against each other to be crowned Army Professional Photographer of the Year.

Running since 1975, the Army Film and Photographic Competition showcases the very best photographic and cinematography by a wide variety of talented individuals.

This is the first year outside suppliers and contractors were invited to attend the award ceremony, held at the National Army Museum. Supacat part of SC Group-Global were one of the privileged few to be amongst the invitees.

Nicky Yeoman, Head of Marketing and Sales Operation at SC Group-Global and Georgie Burridge Spares Manager represented Supacat. Nicky said: “It was an honour to be invited to represent Supacat at such a prestigious ceremony. It is evident that we have many talented photographic professionals in the Army, who are bringing the complex reality of Army life to LIFE.

Both Georgie and I felt we were spending the evening amongst many future rising stars. These professionals will become the story tellers of the future but instead of using words, they will be using a camera lens. Looking forward to following their journeys”

The beauty of these awards ensures that talented men and women within the armed forces are not just being recognised for their creative eye, but recognised as historians. These professionals are skillfully capturing moments which would otherwise go unrecognised; as they capture day-to-day operations, it means these moments can be shared with future generations – so, ‘never forgotten!’

Supacat are delighted that Corporal Ben Beale Royal Logistic Corps was not just nominated but went on to WIN the Professional Category Story. The ‘Who’s in There?’ story documents the troops on exercise in Norway. The camera showcases their tenacity and ingenuity by hiding not just themselves, but three Supacat HMT Jackals in a barn, hidden completely out of sight from the enemy.

Ben Beale explained: “While we were in Norway, we went to find the Light Dragoons Light Cavalry.  The LD’s were in their light reconnaissance role and using a civilian barn as a hide out.  This barn was hiding three vehicles and an observatory.

As I was leaving the barn, I had to take the photographs, as I love to mix military gear and window light, so atmospheric.  Big thanks to the judges, as I wasn’t expecting it at all.”

Nicky Yeoman added: “From all the team at Supacat, we would like to congratulate Corporal Ben Beale on achieving the Professional Category Story award. We are delighted that three Supacat HMT Jackals formed part of the story! Behind the camera, Ben demonstrates how the Jackal can be concealed from operation while bringing the reconnaissance exercise to life.

We are also delighted that the panel recognised Ben’s ingenuity by telling a captivating story simple, through the eye of a camera lens, which means his work will be available for future generations to see.”

To find out who the winners and nominees were from the 16 photographic categories visit the army photographic 2019 winners page. 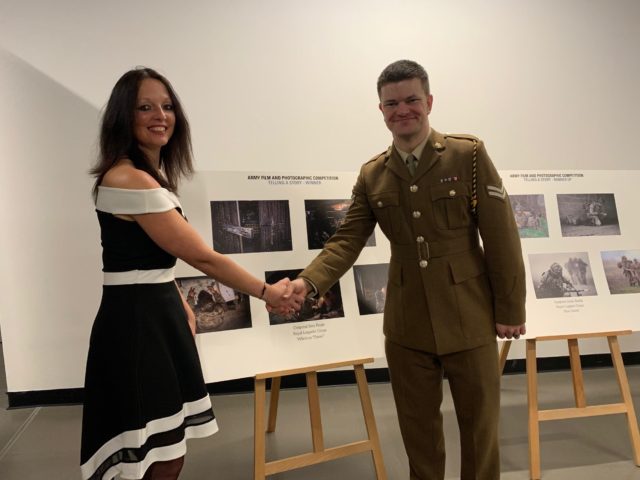