The UK MoD had invited Supacat to participate in the competitive Tender for the LPPV Programme, which is being procured under an Urgent Operational Requirement for an initial batch of 200 vehicles to enter service in late  2011.  This invitation followed the purchase earlier this year by UK MoD of two SPV400 vehicles from Supacat as part of the ongoing risk reduction activity being undertaken with both bidders on the LPPV programme.

The SPV400 has been purpose designed to provide troops with the protection and mobility needed against the threat from Improvised Explosive Devices (IEDs).  The SPV400 combines an integrated blast and ballistic protection system, including all composite protected crew pod and V-shaped hull.  It has exceptional all terrain high mobility performance, comparable to the Supacat designed Jackal and Coyote, and the agility to manoeuvre in tight urban environments.

“The SPV400 offers protection levels way beyond those available in the 7.5 ton light patrol class.  With our protection partners, NP Aerospace, Supacat has designed a highly mobile vehicle with crew survivability built in from the outset”, said Nick Ames, Managing Director, Supacat.

A modular and future-proofed design allows the SPV400 to be upgraded to meet new threats and requirements.  The V shaped hull will protect the crew in an under-belly mine strike scenario.  The modular approach will also enable the SPV400 to be repaired in theatre following mine blast incidents by replacing the damaged module(s).

“The modular approach reduces overall damage to the system and will allow LPPVs to be put back on the road quickly. With the SPV400, the MoD will not have to write a vehicle off each time there is a mine strike”, said Nick Ames, Managing Director, Supacat.

The SPV400 is designed by Devon based Supacat, the world leader in high mobility, all terrain vehicles.  Its armour protection partner is Coventry based NP Aerospace, which has designed the composite crew pod and protection system with access to the UK’s classified armour technology.   Supacat and NP Aerospace have formed an Alliance Agreement under which volume production will be conducted through the Alliance at NP Aerospace’s Coventry facility.   Supacat and NP Aerospace have proven track records in supplying and supporting vehicles in service with British Forces in Afghanistan, with Supacat responsible for Jackal and Coyote and NP Aerospace for Mastiff and Ridgback.

All Intellectual Property Rights for the SPV400 are UK based with the automotive solution residing with Supacat and the protection system with NP Aerospace.  The Design Authority is held by Supacat.  This means the UK retains full control over future design upgrades and the SPV400 is free from US ITAR restrictions.  Potential future export revenues will be retained in the UK.   The selection of the SPV400 for LPPV would strengthen the UK’s innovation and engineering skills base and support manufacturing jobs, sustaining between 1000 and 1200 jobs throughout the UK 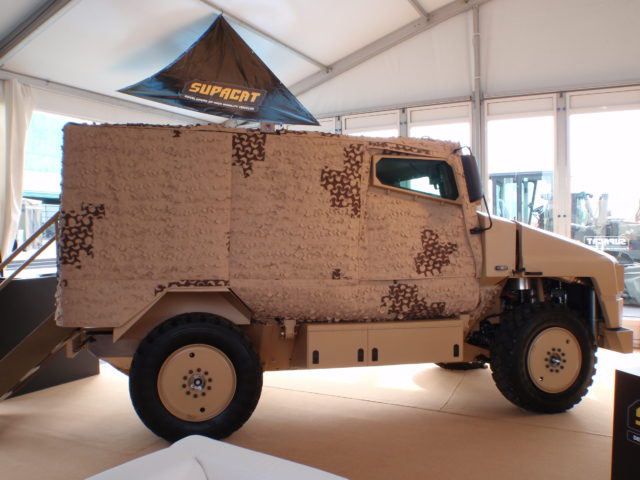