The famous British Top Gear motoring show presenter Jeremy Clarkson recently described his country life in the Sunday Times and mentioned that he goes to pick up wood from the forest in a Supacat special vehicle. Clarkson bought a small six-wheeler produced by the British company in Devon in the south-west of England at a military sale. The company supplies its vehicles to the special forces of several NATO member states, including the domestic British army and allied Australia. Supacat, one of whose special forces vehicle types appeared in one of Clarkson’s shows ten years ago, is now seeking the favour of Czech soldiers. The Chrudim paratroopers will need about a hundred “light attack vehicles” worth around one billion crowns for the regiment currently under construction. The new machines should replace existing Cayman specials, which are based on the British Land Rover. “Supacat vehicles are modular, original designs which can be fitted with various weapon systems,” said Phil Applegarth, the company’s director, in an interview with HN.

It is not yet clear exactly what machines will be needed by Czech soldiers and with what equipment. As such, the price remains unknown. According to spokesman Jiří Pejšek, the General Staff and the Ministry of Defence are still working on a detailed specification of what such a vehicle, or its three different models, should look like. The tender and purchase would thus be possible in 2022 at the earliest, but more likely 2023. Last year, the Ministry addressed 20 companies in a marketing survey, 12 of which sent their offers. In addition to Supacat, they included the Israeli SandCat machine, the Eagle vehicle from Euro-American company GDELS, Toyota Land Cruiser vehicles, as well as models from British company Jankel or Czech producer Dajbych.

According to Phil Applegarth, an order in the Czech Republic would be an excellent reference for other markets in Central Europe. To the logical question of whether Brexit will prove a complication for a British company like Supacat operating on the continent, he replies with a smile: “We fill in the same amount of paper as we did before.”

A usual condition for such tenders is that offers show the largest possible share of domestic production and services, because a “light attack vehicle” for Czech paratroopers would be purchased with at least the next twenty years in mind. “I estimate that sixty percent of production and all servicing would take place in the Czech Republic,” said Applegarth.

Supacat’s Czech partner is the domestic armaments company LPP, led by entrepreneurs Jiří Sauer and Radim Petráš, which is better known as a manufacturer of various special devices and as a systems integrator. It is led by the former commander of the ground forces of the Czech Army  General Miroslav Žižka, who, somewhat surprisingly, left the army three years ago after returning from the post of Czech military representative to NATO and the EU, because there was allegedly no place for him in the armed forces. Žižka is in charge of cooperation with Supacat.

According to General Žižka, vehicles like Supacat’s fit into what a modern army should look like. According to him, three priorities are key to the modernisation of the army: “Firstly, a combined information system so you know in real time what is happening; secondly, autonomous and robotic systems that may eventually replace people in the front line; and thirdly, the availability of rapid reaction forces which can be quickly transported where they are needed,” said the general in an interview with HN. “You can only control an area with live soldiers. There may be fewer of them today, but they are equipped with sensors and other modern technology. ”

Paratroopers need to work even with relatively simple machines ensuring a secure connection and cyber protection. Other considerations include the ways in which man-made machines work with drones and unmanned ground machines.

“Supacat makes vehicles which, with their modularity, enable, among other things, cooperation between a human-controlled machine and an automatic external machine,” said General Žižka. One of the company’s models makes it possible to separate one vehicle axle and quickly convert one version of the machine to another.

Before new models for paratroopers can be selected, the Ministry of Defence and the military will have to deal with financing for ongoing contracts, such as the aforementioned infantry fighting vehicle programme and the previously agreed delivery of Shorad missiles and French Caesar artillery. However, it is uncertain whether, due to delays in the Ministry’s budget resulting from blocking maneuvers by the Communist party over ten billion crowns and other administrative difficulties, these large purchases will be completed before this year’s parliamentary elections. 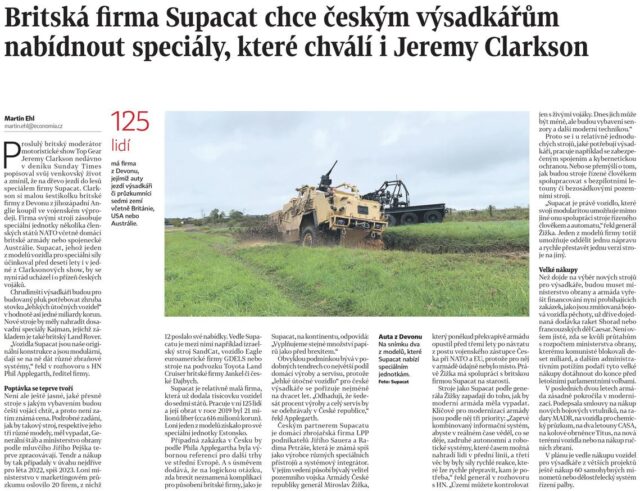