Dunkeswell, Devon, UK, 10 June 2012, At Eurosatory 2012 Supacat is exhibiting the latest production standard Supacat Protected Vehicle 400 (SPV400), which offers improved reliability and handling after having completed over 21,000km of trials, during which its reliability level has increased to 96%.

These improvements were demonstrated in March at Millbrook Proving Ground where the SPV400 (Vehicle 7) performed robustly in pre-feasibility trials for the UK Ministry of Defence’s Multi Role Vehicle -Protected (MRV-P) requirement.

Supacat has focussed on maturing the design since 2010 when it was assessed for the UK MoD’s requirement for a Light Protected Patrol Vehicle (LPPV).  The SPV400 is one of only two vehicles in the 7.5 ton protected light patrol vehicle class to have met the UK MoD’s stringent requirements.

“The SPV400 is proving itself as a robust light protected patrol vehicle and is attracting interest in the international market”, said Nick Ames, Managing Director, Supacat Ltd.

A light patrol vehicle in the 7.5 ton class, the SPV400 carries a crew of six (2 +4) and combines an integrated blast and ballistic protection system, including a protected all composite crew pod and V-shaped hull.  Using the latest composite and ceramic armour systems, the crew pod is constructed as a separate module, sealed off from potential secondary projectiles, such as kit and electronic devices, which are housed in a rear compartment.   All seats are mine blast protected.

The SPV400 has exceptional all terrain, high mobility performance and is capable of speeds up to 80mph on the desert plain.

A modular and future-proofed design allows the SPV400 to be upgraded to meet evolving threats and requirements.  The V shaped hull protects the crew in an under-belly mine strike scenario, while the modular approach enables the SPV400 to be repaired in theatre following mine blast incidents by replacing the damaged module(s).

Supacat is also exhibiting the Wildcat light strike vehicle and the HMT Series (Jackal) at Eurosatory.  In April this year the Australian Defence Material Organisation (DMO) selected Supacat as Preferred Bidder for the Special Operations Vehicle element of the Project Definition and Evaluation phase (PD&E) of JP2097 Ph 1B (REDFIN).  Supacat’s bid offers the latest version of its Special Forces HMT Extenda vehicle. 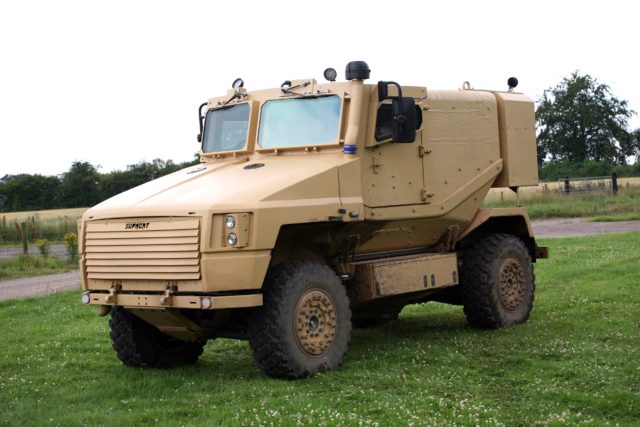