In November 2004, Mick was serving with the Royal Signals when he lost both his legs and suffered brain injury in a suicide bomb attack in Iraq. But since he first got on skis in 2008, he’s been going from strength to strength. Mick recently placed 3rd at the Austrian National Championships and only a week later went on to win his first international race at the Italian National Champions. As a result, he is fast becoming one of the country’s top disabled skiers.

Now Mick can ensure he reaches his full potential after a joint effort from Help for Heroes, Supacat, the Combined Services Disabled Ski Team and NP Aerospace to provide him with the highest spec equipment. Mick’s new rig is an off the shelf Nissin item purchased by Help for Heroes. This has then been adapted and re-engineered by Supacat, designers of the acclaimed Jackal vehicle, who have developed a custom built state of the art suspension system and conducted the systems integration. NP Aerospace, who manufacture the UK’s composite helmets and body armour, have manufactured a custom fitted composite seat. The complete system will give Mick the performance and confidence he needs to push his results to the next level.

Mick says, “Knowing the public and my sponsors are supporting me gives me the biggest boost. It makes me so grateful to know their funding is giving me the opportunity to progress with a new career. When I was first injured, I thought I would be limited to desk jobs so to be out on the slopes and now training for the Paralympics is just incredible. Thank you so much to Help for Heroes, my sponsors and to everyone who has believed in me.”

Mick cannot wait to put his new sit-ski through its paces later this week as he hits the slopes visiting a Battle Back ski course before a further training camp in Austria. Battle Back is a Military initiative supported by Help for Heroes, which uses Adaptive Adventure Training and Sports Rehabilitation to help seriously wounded Service personnel gain confidence and return to an active life. 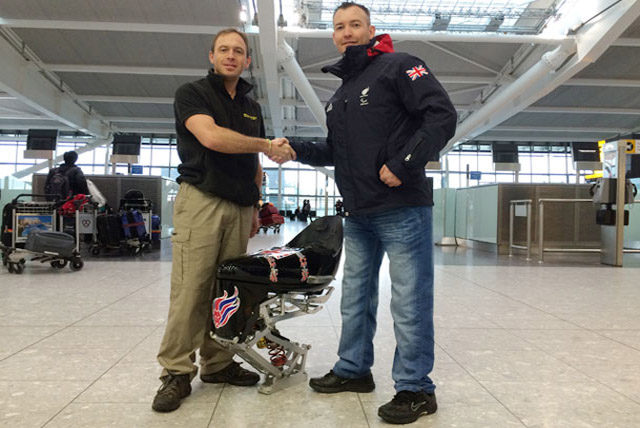