Today a chain of over 30 British manufacturers come together in Coventry to promote the all-British, all-new Supacat SPV400 bid for an Light Protected Patrol Vehicle (LPPV) UOR value c. £200m Ministry of Defence contract to replace the Snatch Land Rover, which will have significant export potential. At NP Aerospace’s Coventry facility, where the Supacat SPV400 would be built, representatives from large and small automotive and defence companies across Britain will demonstrate their readiness to deliver a world beating vehicle that is urgently needed in Afghanistan should the SPV 400 be selected.

The SPV400 is a truly all-British designed and built vehicle and is competing for the LPPV Programme, which will lead to the purchase of an initial batch of 200 vehicles, valued at approximately £200m, and an option to buy a further 200 vehicles. The LPPV competition has created an entirely new class of protected patrol vehicle and therefore opens up significant export opportunities for the successful vehicle.

As all Intellectual Property Rights for the SPV400 are UK based, the automotive solution residing with Devon based Supacat and the protection system with Coventry based NP Aerospace, the SPV400 is wholly British owned, which means all export revenues will be fully exploited in the UK. Supacat holds the Design Authority, guaranteeing the UK retains full control over the technology and future design upgrades – and is free from US ITAR restrictions.

Over 90% of the SPV400 is UK sourced with the supply chain stretching from Darlington, where Cummins UK produce the engine, down to Devon, where the SPV400 is designed by Supacat. Some 15 of the key suppliers are concentrated in the West Midlands around the Coventry production facility, including GKN Aerospace and GKN Driveline, Pailton Engineering, CSES Engineering, Pary Sheetmetal Ltd, Garforth & Goodman, Christy Hydraulics, Dana UK Axles, AFS Ltd, Lighting Aerospace.

“This decision is essential for our soldiers but also for British Industry because the Supacat/NP Aerospace team believe it offers the best and a truly British solution – the SPV400. Not only would it strengthen the UK’s innovation and engineering skills base and support manufacturing jobs, sustaining between 1000 and 1200 jobs throughout the UK, but it is a true British Export”, said Nick Ames, Managing Director of Supacat, the vehicle’s designer.

Purpose designed to counter the threat of Improvised Explosive Devices in Afghanistan and perform a wide range of patrol tasks in areas inaccessible to heavier vehicles, the Supacat SPV400 offers unprecedented levels of mobility and protection which, in combination, break new ground in military vehicle technology and development. A light patrol vehicle in the 7.5 ton class, it carries a crew of six (2 +4) and combines an integrated blast and ballistic protection system, including a protected all composite crew pod and V-shaped hull. On the desert plain it can reach speeds up to 80mph.

“In the UK we still have the capability to design and produce a world beating military vehicle and with the SPV400 the full export benefits will flow back to the UK, helping to underpin continued British development of equipment that best serves our troops on the front line”, said Roger Medwell, Chairman & Chief Executive of NP Aerospace. “This is an important piece of business for NP Aerospace’s future and for all the British companies in our supply chain and for their employees to sustain high quality engineering jobs”.

UK companies, Supacat and NP Aerospace, are respectively world leaders in high mobility, all terrain vehicles and in composite armour protection systems. NP Aerospace designed the SPV400’s composite crew pod and protection system with access to the UK’s classified armour technology. The materials used offer protection from a range of threats and at much lower weight than a traditional steel design. 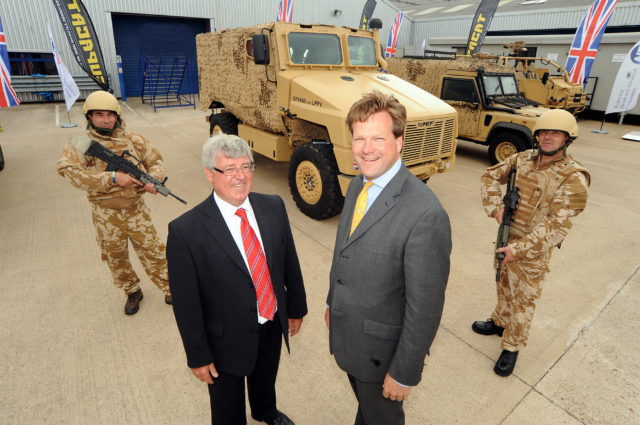