Supacat is showing its Extenda variant of the high mobility `Jackal` (HMT400) in the company’s debut attendance at IDET 2011, Prague, and highlighting the vehicle’s versatility in the specialist forces role and proven performance. Supacat is represented in the Czech Republic by MPI Group and is exhibiting the Extenda in 4×4 configuration on MPI’s stand.
Jackal and all variants of the HMT vehicle platform were specifically designed and developed by Supacat for use by specialist forces and are used by numerous nations’ armed forces worldwide. Their combined protection, firepower and supreme off road performance also met the specific urgent operational requirements of the British Army in Afghanistan and led to over 400 `Jackal` weapons-mounted 4×4 patrol vehicles and over 70 `Coyote` 6×6 Tactical Support Vehicle Light (TSV(L)) entering service in recent years.
At IDET Supacat is displaying the ‘convertible’ HMT Extenda variant. It is unique as it can be configured either as a 4×4 or 6×6 to meet different operational needs by inserting or removing a modular, self-contained third axle unit. The conversion can be completed within hours. The hamper has also been designed as a modular system to enable rapid conversion. Using the HMT variable height air suspension system, HMT Extenda matches the capabilities of its sister HMT 400 Jackal (4×4) and HMT600 Coyote (6×6) platforms.
“Supacat’s HMT family of vehicles, widely known as ‘Jackal’, deliver unmatched performance in the specialist forces role. Its design has been continually upgraded, driven by direct operational feedback, ensuring it remains the vehicle of choice for this role”, said Jamie Clarke, Sales and Marketing Manager, Supacat. “Jackal and its sister HMT variants are proven in service with the most demanding specialist forces and have been acclaimed for their performance, versatility and agility on operations in Afghanistan”.
Leading up to IDET Supacat has been in the region demonstrating the vehicle’s performance to a number of different customers, “they have all been highly impressed with everything we have been able to show them”, said Clarke.
All the HMT series variants can be supplied with an optional mine blast and ballistic protection kit and can be fitted with a variety of mission hampers, weapons, communications, ISTAR and force protection equipment to suit a wide range of operational roles. 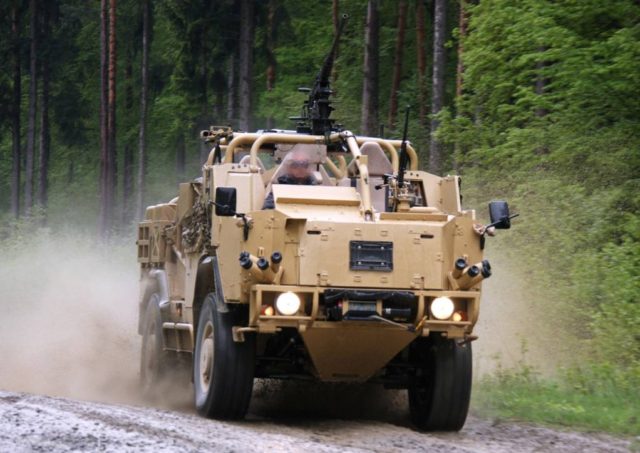