Since October 2011 four year 12 Blundell’s pupils have been working on a for real Engineering problem whilst carrying out their Engineering Education Scheme project. Under this scheme a school team of four is partnered with an Engineering Company. The company sets the pupils a design brief which they must then work on.

The pupils from Blundell’s were Gary Abdoll (Team Leader), Will Muirhead (Report Editor) Tom Golden (in charge of design) and Alex Holme (in charge of the presentation). They met Simon Turner and Nick Baker, Engineers from Supacat at the scheme launch at Plymouth University in October.  Supacat are a local company who design impressive world class high mobility vehicles and had been commissioned by the RNLI to design a vehicle to launch their lifeboats, a Launch & Recovery System. The boys were given the brief to design an engine bay handling system for this vehicle. The engine bay plus attachments (weighing approx 2.5 tonnes) would be safely removed and stored exposing the engine for maintenance.
Work on this project took place at school with several meetings with Simon Turner (from Supacat) and Peter Shrubsall (our EES Mentor). There were also visits to Supacat to see the vehicle itself and get an idea of the scale of the task in hand. A residential at Plymouth University in December helped as this gave the team 3 days to concentrate on this project away from their other school work.

A written report of all the designs and research was produced by the team and sent away over the Easter holidays for assessment. On Wednesday the 2nd May the Celebration and Assessment Day took place at Plymouth University. The team gave a 15 minute presentation to a panel of 7 engineers from various industries and were also questioned about their design at their display stand. They achieved their EES certificates for their project and the scheme will help them when applying for University next year as it is widely respected and shows that the pupils were willing to put in that extra effort above and beyond their AS exams. They have learned a huge amount about working in industry but also improved their team work, report writing, planning, timekeeping and presentation skills. I would like to thank all at the EDT for organising this brilliant scheme in the South West and Peter Shrubsall our EES Mentor. Last but not least thank you to Supacat for setting the team’s challenge and particularly Simon Turner for giving freely of his time, expertise and patience. 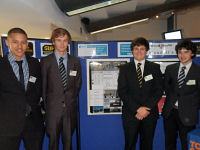