As the UK seeks to deliver a ‘greener’ future following the government’s announcement in February to ban the sale of all new petrol and diesel vehicles by 2035 –  the University of Exeter and Supacat are helping to pave the way  for a green revolution in defence and off-road transport.

A hybrid electrical powered version of the All-Terrain Mobility Platform (the ATMP), one of the world’s most popular, versatile and battle-proven off road military vehicles, has been developed.

Already validated to successfully operate in a range of very harsh terrains, the vehicle’s  new technology could be exported to allied forces and translated into a range of challenging `off-highway`  uses, including emergency services, rail, marine, forestry and aerospace.

Engineering experts from the University of Exeter collaborated with British designer and developer of high mobility defence vehicles, Supacat, to pioneer a new, electric-drive version of the ATMP vehicle – which has been used by regular and special operations forces in combat zones across the world.

Called the H-ATMP, the new vehicle replaces its traditional diesel engine with six electric motors, one attached to each wheel, and can be configured for full electric or hybrid versions.

Crucially, for applying to other rugged off-highway transportation, the hybrid electric drive-train can be tailored and customised, depending on the mission, range, payload and operating environment that each vehicle will be used for.

Several commercial vehicle manufacturers have introduced electric drive trains into their SUVs and 4x4s, but electric and hybrid drive technology is very much a novelty in the military sector, and particularly when engineered into a high mobility vehicle. The H-ATMP can be parachute-dropped and amphibious, can deliver troops, carry up to 1600kg payload and haul artillery across extreme rough terrain.

Prof Chris Smith, University of Exeter, said: “The H-ATMP has to be able to cover the most intimidating and adverse terrain, while drawing artillery and carrying troops around the battlefield.  While it may seem that the technology is similar to electric SUV vehicles we see on the road, the reality is that is the H-ATMP will conquer rough terrain that would leave the best 4×4 stuck in the mud.”

The vehicle can also act as a power hub for field hospitals or communication systems, and because the electric vehicles emit little noise or heat, the vehicle is stealthy on the battlefield.

Now, the innovative, eco-friendly vehicle is being developed further so it can be ‘optionally manned’.  This vehicle will be able to drive itself over highly complex terrains while the driver can conduct other tasks or place themselves in a safer location for more dangerous operations, or it can be linked to a higher level mission planning tool to create an autonomous ‘system of systems’, which will help meet the many potential users’ aspirations for safety improvements, enhanced mobility or reduced manning in the future.

The H-ATMP is due to be evaluated by a range of specialist users later this year.  Such has been the success of the project, Supacat are now well positioned to exploit their world-class expertise in the selection, integration and control of electric and hybrid drives for high mobility vehicles and intend to apply their expertise to other vehicles, such as their fleet of High Mobility transporters (HMT) in service with Special Forces around the world, including the `Jackal` and ‘Coyote’ in the British Army. It has already been applied in the control of a specialist on-road vehicle now entering production.

The step change in technology integration and associated performance benefits is the result of a unique collaboration between the University of Exeter and Supacat, the defence business of Devon-based SC Group, funded by the Government’s Knowledge Transfer Partnership (KTP) scheme.

Professor Smith said: “The KTP provided us with an excellent challenge to innovate a new, cleaner electric powered vehicle, which has kick-started a fast-expanding stream of work with other companies in off-highway, rail, defence, and marine hybridisation and electrification research.  It’s catapulted us into a leading position in innovation for new clean power systems for all kinds of transport.”

Steve Austen, Engineering Director and Chief Engineer of SC Group, explained that, “the knowledge that has been gained and distributed throughout the project partners is invaluable, resulting in significant additional revenue in the life of the project and high confidence of sustained additional revenue for the company in this sector over the next few years.”

These two projects have meant two new jobs have been created with two very talented young engineers from the University, Matt Harvey and Yash Katare, joining SC Group.  They will work on developing the technology for Supacat’s defence market and to serve the wider marine, rail, energy or emergency services markets for SC Group sister business, SC Innovation.

The original 6X6 ATMP was used as a highly mobile all-terrain ‘workhorse’  since its introduction in the 1980s, in both civilian and military roles. It was a favoured vehicle of the British Army and special operations forces, and has been deployed to Bosnia, the Gulf Wars and Afghanistan, amongst other international deployments.

For the new all-electric version, the development team stripped out the old diesel power train, and designed a new drive system using electric motors also made in Devon by Ashwoods Electric Motors.

KTPs help businesses improve their competitiveness and productivity through the better use of knowledge, technology and skills within the UK knowledge base. They are funded by UKRI through Innovate UK with the support of co-funders, including the Scottish Funding Council, Welsh Government, Invest Northern Ireland, Defra and BEIS.

Innovate UK manages the KTP programme and facilitates its delivery through a range of partners including the Knowledge Transfer Network (KTN), Knowledge Bases and Businesses. Each partner plays a specific role in the support and delivery of the programme.

Click here for more information on KTPs at University of Exeter.

To view the video visit here 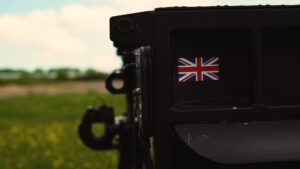 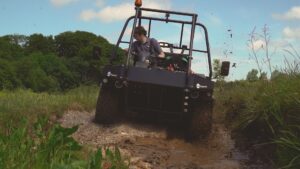 About the University of Exeter

The University of Exeter is a Russell Group university that combines world-class research with high levels of student satisfaction. Exeter has over 23,000 students and is in the top one per cent of universities worldwide. Exeter is also ranked 10th in the Guardian University Guide 2020 and 12th in The Times and The Sunday Times Good University Guide 2020. In the 2014 Research Excellence Framework (REF), the University ranked 16th nationally, with 98% of its research rated as being of international quality, while in 2017, Exeter was awarded a Gold rating in the Teaching Excellence Framework (TEF) assessment.

Supacat is the world’s leading specialist in the design and development of high mobility defence vehicles with over 1000 specialist, battle-proven vehicles delivered into service globally. Part of SC Group, it is an innovative engineering and design company providing global, defence focussed products and services with offices in the UK and Australia. Its agility and speed enables Supacat to provide and fully support high performance solutions in short timescales. The UK Ministry of Defence’s procurement of Jackal and Coyote vehicles demonstrates the regard in which Supacat’s capabilities and products are held. www.supacat.com

NP Aerospace is the engineering authority for the MoD’s fleet of 2,200 Protected Mobility Vehicles until 2024* following the award of a £63m contract in January 2019. Supacat is the OEM and design authority for the Jackal and Coyote base vehicle platforms. Under the MoD’s PMETS (Protected Mobility Engineering & Technical Support) contract, NP Aerospace and Supacat are delivering capability improvements across numerous domains including environmental, safety and technical innovation.

James Kempston, CEO, NP Aerospace, comments: “As design authority for the Jackal and Coyote platforms, both of which rely on superior mobility and tactical awareness – Supacat brings a wealth of expertise to the team. Tasking collaboration through the MoD PMETS contract ensures we are able to deliver platform capability improvements that will have a major impact on the UK armed forces on operation, in the shortest timeframe possible and via the most cost-effective means. Having a lead engineering authority across multiple vehicle OEMs** delivers value for money through component and system commonality.”

Nicholas Ames, Chief Executive of SC Group, parent of Supacat, comments: “Supacat has a long-established relationship with NP Aerospace as a major armour manufacturer and vehicle integrator with a long-standing heritage in lightweight ballistic composites and vehicle programmes. This is an exciting opportunity to work together once again, for our customer to benefit Jackal and Coyote and potentially other vehicles in the fleet. We are both agile SMEs and our partnership enables us to introduce new technologies and tailored modification packages that ensure vehicles remain safe and supportable and can meet changing operational requirements.”

*The vehicles covered under the PMETS contract include the Mastiff, Wolfhound, Ridgback, Buffalo, Choker, RODET, Foxhound, Jackal, Coyote and Husky.

**NP Aerospace works with all of the vehicle OEMs for the MoD protected mobility fleet including General Dynamics, Navistar and Supacat.

Supacat is the world’s leading specialist in the design and development of high mobility defence vehicles with over 1000 specialist, battle-proven vehicles delivered into service globally. Part of SC Group, it is an innovative engineering and design company providing global, defence focussed products and services with offices in the UK and Australia. Its agility and speed enables Supacat to provide and fully support high performance solutions in short timescales. The UK Ministry of Defence’s procurement of Jackal and Coyote vehicles demonstrates the regard in which Supacat’s capabilities and products are held.