Supacat directors, Lizzie Jones and Nick Ames, represented the SC Group,  the holding company for Supacat Ltd at a reception hosted by HM The Queen at Buckingham Palace on 11 July honouring the winners of the 2017 Queen’s Enterprise Awards, the UK’s most prestigious business awards.   The innovative design and engineering company, which provides products and services globally, including specialist off-road wheeled and tracked vehicles, was awarded the Queen’s Award for International Trade for Outstanding Short Term Growth.

Nick Ames, Chief Executive of SC Group, Supacat’s holding company, said, “It was proud day for Supacat and SC Group.  My abiding memory will be the immaculate nature of the event from the organisation, to the staff, to the buildings and the performance of the Royal Family.  A truly inspiring event!”

Over the last three years Supacat’s overseas earnings grew from £2.5m to over £32m buoyed by a large Australian contract for its Special Forces HMT Extenda vehicle.  The vehicle is operated by the world’s elite Special Forces and is part of Supacat’s family of military high mobility and protected vehicles, which includes the acclaimed `Jackal` and `Coyote` operated by the UK Armed Forces.

The Queen’s Award will be formally presented to Supacat by the Lord Lieutenant of Devon on 18 September at the company’s headquarters in Dunkeswell, Devon. 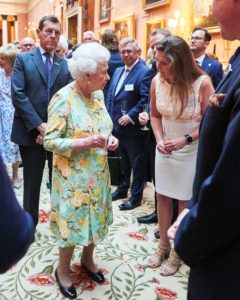 SC Group has collected two prestigious business awards this week, both from Insider Media. SC Group was honoured to win the National Award for Aerospace and Defence at the Made in the UK Awards 2017 and also the Medium-sized Company of the Year 2017 at the South West International Trade Awards.

The National Award for Defence and Aerospace was awarded to the company deemed by the judges to have made the most exciting impact on exports from the South West, either in terms of international presence, export growth, or exports as a proportion of sales.

The Medium-sized Company of the Year award was awarded based on our success in international markets. Specifically, the judges were looking for businesses that have continued to innovate, faced down challenges, and developed opportunities that have delivered sustainable growth to the business.

Nick Ames, Chief Executive of SC Group said “we are delighted to be in receipt of yet more awards, these ones coming straight after our recent Queen’s Award for Export. At SC Group, we’re all very proud of what we do on a global scale but also how we achieve that whilst headquartered in the South West of the UK”.  Nick added: “Engineering capability in the South West is growing and we’re glad to be a part of that particularly with major projects such as Hinkley Point C nearby.  Many thanks to all who have supported us in winning these awards.”